Matthew Vines grew up in an Evangelical Presbyterian Church in Kirkwood, Missouri.  When he slowly came to the realization that he had a homosexual orientation, he was horrified by the fact that his Presbyterian church offered him no route whereby he might gain God’s blessing for his sexuality:

We affirm God’s design for the two sexes – male and female – and believe that each is a glorious gift from God.  Our sexuality is meant to be offered back to Him.  For some, this means joining in a one-man, one-woman marriage – for procreation, union and mutual delight.  For others, this means celibacy which allows for undivided devotion to Christ.  Sexual expression is designed for the marital relationship, and homosexual lust[i] and behavior are among the sexual sins that are outside God’s created intent and desire for us.

Vine, at the age of 21, realized that his divine salvation relied upon his willingness to accept God’s plan that sexual intimacy was exclusively reserved to heterosexual partners bound together in marriage.  Since Vines knew that he was not attracted to women, he faced the bleak prospect of trying “repairative therapies”[ii] and praying to God for a miracle that would “transform his sexual appetites.”[iii]  Should these options fail, he knew full well that he would be forced to maintain a lifelong celibacy, even though he honestly recognized that he was not naturally inclined in this direction either. Shaken by these bleak prospects for his future, Vines deliberately interrupted his college studies at Harvard (2008-2010) because he knew that he had to consult with biblical experts and come to a deeper understanding of why God opposes homosexuality as a divine calling for men like himself.

After doing some biblical research, he drafted a six-page summary of his results that he submitted to his father.  He trusted his father to have wisdom in this matter that exceeded his own.  When his father accepted his initial findings, he spent months expanded his study and made preparations to share his discoveries with members of his church who were concerned about this issue. In order to reach a wider audience, Vines spent $500 of his own money to have a professionally crafted five-minute video produced.  He distributed this online in March of 2012 under the YouTube title, “The Gay Debate: The Bible and Homosexuality.”  Given the largely positive response that his video received, Vines went ahead and prepared a full-hour video.

In April 2014, Vines published a book, God and the Gay Christian. 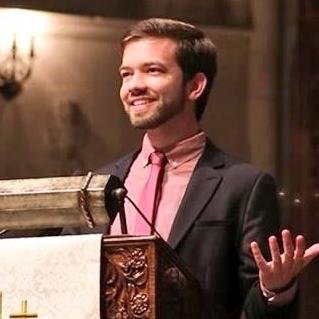 He then entered into public debates with pastors and theologians.  Vines debated Dr. Michael Brown, author of Can You Be Gay and Christian? on Moody Radio on 28 June 2014.[iv]  Given the pain and confusion expressed by hundreds of young people who poured out their woes to him in emails, Vines felt called to initiate The Reformation Project—“a nonprofit organization designed to connect, train and empower LGBTQ Christians and their allies to actively promote changes in their churches on this issue.”[v]

Matthew Vines as a young man on fire

Make your choice for viewing either the short or the long exposure to Vines:

[i] Notice that this evangelical statement terms all immoral sex as “lust.”  Ratzinger would prefer to say “self-indulgent passions” rather than “lust.”  Why so?  Because Ratzinger believes that the homosexual inclination is not chosen and, as such, in not to be considered in itself “sinful.”  Moreover, he allows that while all homosexual acts are “intrinsically disordered,” the degree of guilt changes with the circumstances.  This is a much more nuanced position.   Here is the critical text: It has been argued that the homosexual orientation in certain cases is not the result of deliberate choice; and so the homosexual person would then have no choice but to behave in a homosexual fashion. Lacking freedom, such a person, even if engaged in homosexual activity, would not be culpable. Here, the Church’s wise moral tradition is necessary since it warns against generalizations in judging individual cases. In fact, circumstances may exist, or may have existed in the past, which would reduce or remove the culpability of the individual in a given instance; or other circumstances may increase it. What is at all costs to be avoided is the unfounded and demeaning assumption that the sexual behavior of homosexual persons is always and totally compulsive and therefore inculpable (The Pastoral Care of Homosexual Persons, §11).

[ii] Reparative Therapy (also known as Conversion Therapy) claims that adolescent homosexuality may arise from traumatic events in the past and that, with careful psychological counseling, part or all of same-sex attraction can be dispelled.  For a strong and persuasive advocate, see Joseph Nicolosi, Ph.D., What Is Reparative Therapy? Examining the Controversy (http://www.josephnicolosi.com/what-is-reparative-therapy-exa/).  Please be aware, however, that this form of therapy has been widely shown to be non-productive and even harmful to the degree that even the American Psychiatric Association warns against crediting its claims.  See “The Lies and Dangers of Efforts to Change Sexual Orientation or Gender Identity” (http://www.hrc.org/resources/entry/the-lies-and-dangers-of-reparative-therapy).

[iii] Matthew Vines writes in his book as follows: As a lawyer, my dad weighed the evidence for the possibility of orientation change.  Pointing to Matt. 19:26, he reminded me that all things are possible with God.  Yet after reading a fair amount about “ex-gay” ministries, he realized that none of the evidence seemed to show God was changing gay people’s sexual orientation (God and the Gay Christian, p. 10). A controversial Christian ministry devoted to changing people “affected by homosexuality” announced in April of 2014 that it was shutting its doors after operating for more than three decades.  The announcement by Exodus International came during its religious conference in Irvine and after its President Alan Chambers apologized to members of the gay community for “years of undue judgment by the organization and the Christian Church as a whole.” (http://jonathanmerritt.religionnews.com/2014/04/22/ god-gays-conversation-albert-mohler-matthew-vines/#sthash.ji8Nb8dn.dpuf). In October of 2011, John Smid, the former director of Love in Action, the country’s oldest and largest ex-gay ministry, acknowledged on his blog that, contrary to the claims of the movement he represented for decades, gay people cannot become straight. “I’ve never met a man who experienced a change from homosexual to heterosexual,” he wrote. He himself certainly has not.  Evangelicals used to insist that “change is possible,” says Warren Throckmorton, a Grove City College psychology professor once associated with the ex-gay movement. “The new paradigm, I believe, is no, it doesn’t look like that works, and so you go with it, you accept it, and you try to make the best life you can in congruence with the rest of your beliefs,” he says (http://www.thedailybeast.com/articles/2011/10/13/ex-gay-leader-john-smid-s-about-face.html).

[iv] The Moody debate can be found online at http://www.patheos.com/blogs/adrianwarnock/2014/07/video-michael-l-brown-and-matthew-vine-debate-can-you-be-a-gay-christian/

[v] Matthew Vines writes, “My inbox serves as a daily reminder of the countless people who are still struggling, and who still feel voiceless and powerless in the face of overwhelming opposition [within their church].”  Matthew Vines, “The Reformation Project: Training Christians to Eradicate Homophobia from the Church,” The Huffpost Gay Voices, 05 March 2013 (http://www.huffingtonpost.com/matthew-vines/the-reformation-project-christians-homophobia_b_2790039.html).